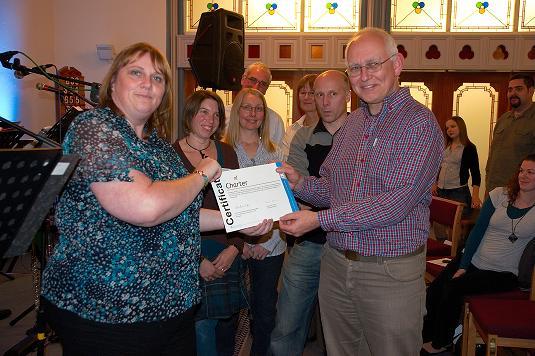 On the 17th October at the United Reform Church in Diss Norfolk, Integrate YFC was officially launched.

The launch started with a cream tea, followed by the service which saw many attend from the church itself as well as youth and leaders from other local congregations. Gavin Calver was guest speaker and he, Liz Etherton and Mark Tuma (Norwich YFC) presented the certificate and officially commissioned the centre. The worship at the service was led by a youth band from several of the local churches who played together at a recent summer camp, known as Snoccash (Suffolk and Norfolk Christian Camp at Sizewell Hall). The service was followed by a party for the youth.

Steph Richardson, Director of Integrate YFC says, “One of the greatest encouragements for me on the night was the forming of new relationships between churches – both leaders and youth leaders. Since the launch we’ve also seen a long held vision to run a joint youth alpha in a venue that wasn't connected to a church became a reality. With no suitable venue, we prayed and a week later a new Costa Coffee was opened in Diss. When we approached the manager, it was obvious God had prepared the way - to such an extent that the manager was keen to show me a letter from a local church near his previous Costa coffee, recommending using his cafe for events such as alpha to churches in our area!”

Speaking after the event, Liz Etherton, Local Ministries Senior Manager said, "We are thrilled to commission Integrate as a Chartered Local Ministry of British Youth for Christ in Diss. We believe that working together in this new partnership will enable Integrate to build on their great ministry so far and look forward to seeing so many more young people reached with the Gospel in both Diss and beyond. The launch event was a great night where we celebrated together and looked forward to exciting times to come!"