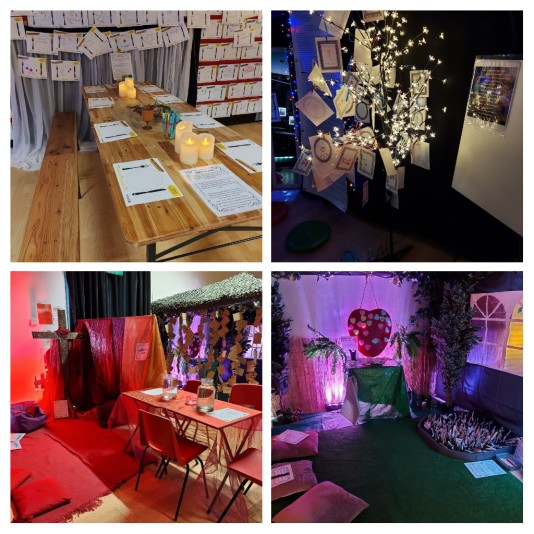 As part of our chaplaincy initiative in the St Benet's Multi Academy Trust we had the privilege of running an Easter Prayer Space in Archbishop Sancroft High School, Harleston, from 28th March – 1st April.  We set up 5 different zones, separated by gazebos, rails and fabric with different stations in each.  Based around Easter we had Garden, Hope, Image, World and Forgiveness zones, an area to provide reflection on the Last Supper, a ‘Be still’ area and an empty chair to encourage time to think about people we have lost.

Over 500 young people visited, including year 5 and 6’s from Dickleburgh and Harleston Primary Schools, and had the opportunity to connect with God or reflect using the different activities provided.  A popular station in the Forgiveness zone was hammering nails into a wooden cross to think about things we are sorry for and asking for God’s forgiveness.  Some good conversations were had around this and also with the fizzy forgiveness activity where we watch tablets dissolving in water, letting  go of hurts caused by others. Young people are very concerned about the situation in Ukraine at the moment and thoughts were very much centered around this in the World Zone with lots of prayers offered up for peace with the help of origami doves.  The Image Zone gave students the space to think about how they see themselves and we were also able to tell them what God thinks about them.  Many of the young people found the ‘Be Still’ area useful as it enabled them to take time out of a busy schedule and just sit and watch the glitter swirling around the calm jar.

We were able to have conversations with them and it allowed the young people to ask questions and write down thoughts and feelings if they wanted to.
The staff were very positive and we had many comments from them about how great the timing of this was, coming out of Covid, the pressures everyone is facing and also just before the year 11 exams.

We would like to thank the many volunteers and prayer supporters who carried us through the week.  A team of 12 volunteers helped with setup, filled the slots throughout the week and were available to answer questions and act as guides through the Prayer Space.  Despite the many challenges we were able to carry out a full programme, and through the power of prayer Amy was able to be there for the whole week, having recovered from Covid just in time! Thanks be to God for this amazing week and we look forward to seeing the effects of it within the schools well into next term.